The IA Board has allocated $15 million, in annual installments of $750,000, to the Blueprint 2020 Build the Bike Route System (BRS) Project. Consistent with IA Board-approved updates, Blueprint will propose projects for IA Board approval annually, under the BRS program, according to this process:

Read More
The Capital Region Transportation Planning Agency recently completed a feasibility study on the Thomasville Road Trail.  The Feasibility Study was approved by the CRTPA Board at their January 31, 2022 meeting, and the project was approved to move to design.

The Lake Jackson Greenway project will include bike route elements to complete the connection between Lake Jackson Indian Mounds State Park and Lake Ella Park in Midtown. The project is currently under design, and construction is anticipated to begin late this year, or early next. 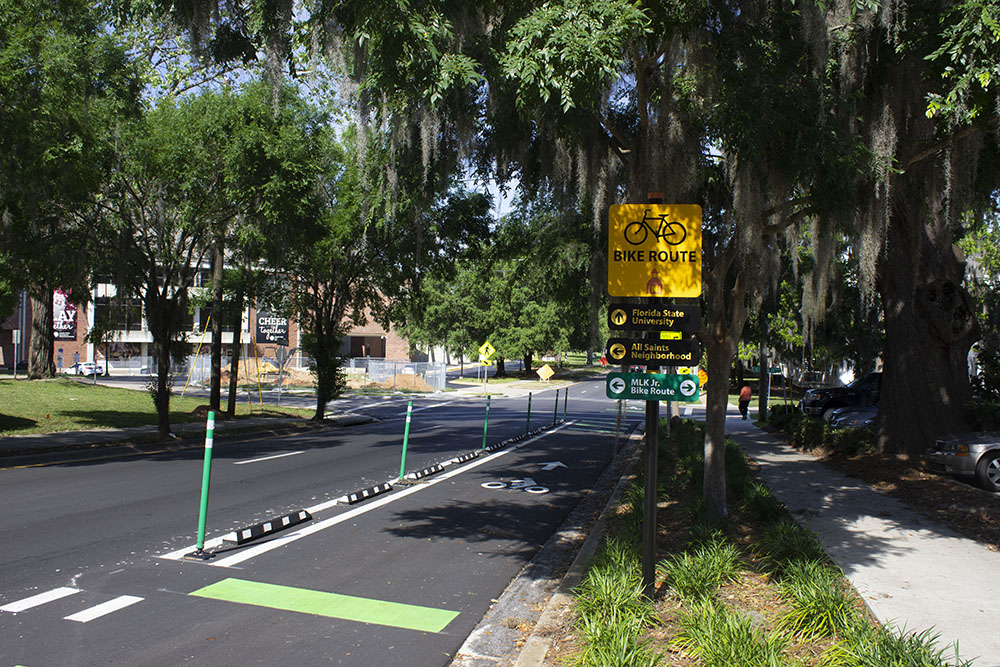 Projects Initiated Under the BRS Program

Approved for procurement at the February 18, 2021 IA Board meeting, this approximately 2.5-mile project will provide a protected bike lane network. The network will run along West Pensacola Street from Tallahassee City Hall to Florida State University, then back downtown along St. Augustine and West Madison Streets, and south along South Adams Street to the Capital Cascades Trail.

Read More
The Downtown-University Bike Lane is under design.  Staff has met with project area stakeholders to get input on the project, and is in the process of developing alternatives for the permanent bike lane facilities. Once design is finalized, construction services will be procured, anticipated for mid to late 2022.

The first of three feasibility studies planned for FY 2022, the 2.31 mile Ridge Road Tier 1 BPMP Major Project will connect Crawfordville Road and the Tallahassee-St. Marks Historic Railroad State Trail to Springsax Road. There are currently no bicycle facilities on this corridor, and nearly 10-15 percent of households in this area do not own a vehicle.

Read More
The project will also connect St. Marks Trail users with Silver Lake Park, and Lake Elberta through the Dr. Charles Billings Greenway, which is a segment of the FDOT SUN Trail. The BPMP proposes installing a multi-use path along the corridor, potentially by widening an existing sidewalk.

The BPMP’s proposed next step is a feasibility study, estimated at $25,000. Planning-level construction costs (with 20 percent contingency) in the BPMP range from $712,800 to $2,376,000. As part of the feasibility study, updated cost estimates will be developed.

The 2.12 mile Blair Stone Road BPMP Tier 1 Major Project would complete a major gap in the bicycle network on Blair Stone Road from Governor’s Square Boulevard to Orange Avenue. The BPMP proposes implementing a multi-use path or designated buffered bicycle lanes. As part of the feasibility study, updated cost estimates will be developed.

A feasibility study has been completed and can be found here:Blair Stone Trail Feasibility Study

The SW Area BRS Connector is a BPMP Tier 1 Neighborhood Network project.  It would provide a north-south connection between the Tallahassee Museum, the Florida State University (FSU) reservation, the FSU Intramural fields (Southwest Rec SportsPlex) and neighborhoods along Pensacola Street and Jackson Bluff Road that currently lack safe bicycle and pedestrian access to these locations. The University Greenway design included in the GWMP also would connect to Tyson Road and Eisenhower Street.

A feasibility study has been completed and can be found here: SW Area BRS Connector Feasibility Study 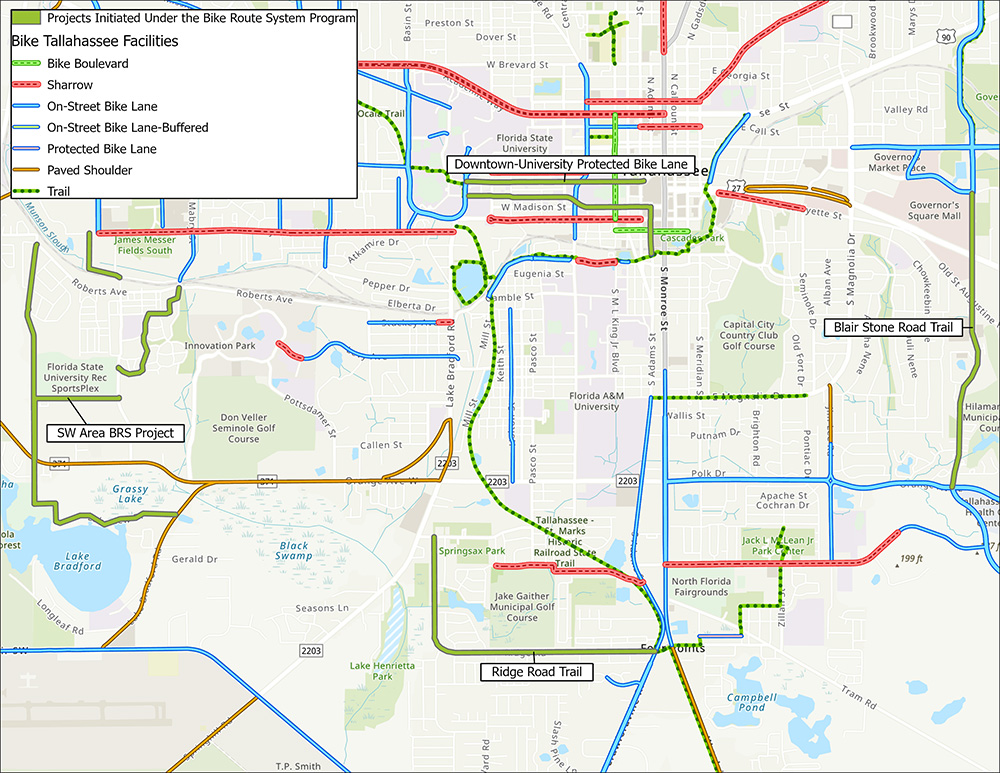