The Southeast portion of Capital Circle, from Connie Drive to Tram Road, has seen drastic changes since construction first began in May 2005. What originally started as a two-lane, undivided rural road lacking many basic safety features has been transformed into a six-lane, divided urban road in a park-like setting. The project’s purpose was to improve the safety and capacity of Capital Circle Southeast by featuring a wide, meandering sidewalk; carefully placed bicycle lanes; stormwater improvements; and substantially landscaped medians. The landscaping within the road right-of-way maintains the natural environment while directing views and relieving driving monotony.

As with all Blueprint projects, aesthetics is an important design element in the Capital Circle Southeast project. Extensive landscaping, including wildflowers and hammocks of trees and shrubs, were put in place to beautify this segment of Capital Circle. While some of the mature live oaks along the corridor had to be removed, maintaining as many of the oaks, for as long as possible, was a priority for project designers.

This corridor has been transformed into an exemplary, multi-modal model to be emulated for years to come. As the road curves past Tallahassee’s Southwood community, new streetlights coordinate traffic flow, and benches and trash receptacles are placed a safe distance from the busy road. Because of its proximity to Southwood Plantation and its greenway and recreational-trail network, the project design includes efficient links to the nearby meandering trail. Keeping protection of the environment at the forefront, plans for erosion and sediment control throughout the segment were designed beyond industry standards. Six stormwater ponds were constructed to ensure runoff would not pollute Wakulla Springs or the aquifer. Also, three additional stormwater ponds on St. Joe Company property accept part of the drainage from the project, ensuring continued protection of area water bodies.

Blueprint designed Capital Circle Southeast with Tallahassee’s future in mind. The additional right-of-way in this area, and the 36-foot-wide median, will accommodate transit service the future. Your tax dollars, made possible by the one-cent sales tax, have taken this project from concept to construction. 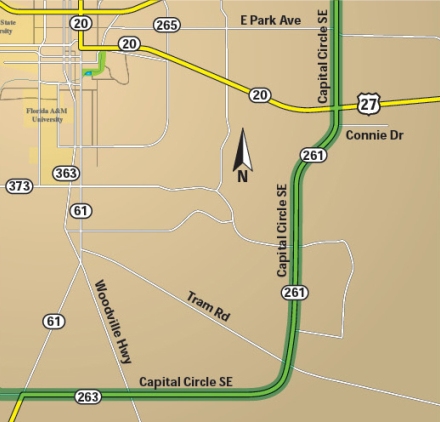 The reconstruction of Capital Circle Southeast from Tram Road to Woodville Highway, an integral part of the Capital Circle corridor, widened 2.3 miles of an existing two-lane road to the present six-lane facility. Improvements to the segment included improvements at two existing intersections and provisions for three additional signals to increase corridor safety. Additionally, Woodville Highway was expanded from a two-lane road to a four-lane divided facility near the intersection with Capital Circle.

To ensure a holistic approach for the entire corridor, Blueprint 2000 included extensive landscaping, 5-foot-wide sidewalks, 10-foot-wide trails, bicycle lanes and other recreational amenities. This project flows smoothly into Capital Circle Southeast from Tram Road to Connie Drive, with consistent landscaping of wildflowers, bark chips and lush trees and shrubs. To the extent possible, natural vegetation was maintained along the corridor to sustain a natural environment.

The right-of-way for this portion of the roadway lies in a low, flat plain where the sandy soils percolate rainfall slowly. Working cooperatively with the St. Joe Company, Blueprint 2000 negotiated a land-swap agreement allowing retention ponds to be built on St. Joe property that later became part of the Stormwater Facilities Master Plan. The existing pond in the system continues to receive runoff, but the amount of runoff from the project has been reduced and the remainder will be managed in the new stormwater ponds.

This effort to build needed infrastructure, protect the environment and accommodate recreational users was made possible by the one-cent sales tax. 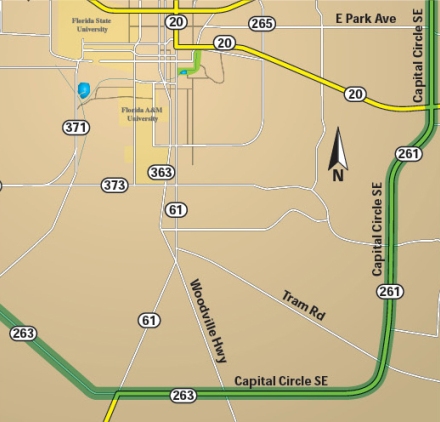