Not long ago, Capital Circle from Commonwealth Lane to west of Tennessee Street was a three-lane congested road prone to flooding. The Capital Circle Northwest Project, as part of the Florida Department of Transportation (FDOT) and Blueprint 2000’s vision for the Tallahassee urban area, changed all that. Using your penny sales tax, the road now boasts six lanes of efficiently moving traffic. The project, completed in September 2007, widened this busy section of Capital Circle, allowing for the safe, effective movement of traffic from the Tallahassee Regional Airport to Interstate 10. In addition to the expansion of 1.99 miles of roadway, the intersections at West Tennessee Street, Tharpe Street, Hartsfield Road and Commonwealth Lane were made safer and easier to navigate.

Using a holistic approach to the development of the entire corridor, all improvements were made with the safety of pedestrians, bicyclists and commuters in mind. New landscaped sidewalks and bicycle lanes have increased the safety and visual appeal of the corridor. The landscape features beautiful trees, lush bushes and manicured grassy knolls. Additionally a regional stormwater facility – a 15.3-acre regional stormwater pond – was built to reduce downstream flooding. The pond provides water-quality treatment for the entire watershed and is an attractive part of Martha Wellman Park, located at the intersection of Tennessee Street and Capital Circle Northwest. The park was constructed as a part of the road-widening project and includes a paved trail and additional amenities.

This project was completed through the cooperative efforts of FDOT, Blueprint 2000, the City of Tallahassee, Leon County, the Northwest Florida Water Management District and the Florida Fish and Wildlife Conservation Commission. Your sales-tax dollars were used to leverage funding partners to accomplish much-needed roadway improvements and a lush, environmentally sensitive recreational park. In August 2009, Martha Wellman Park was selected by Stormwater Solutions Magazine as a 2010 Top Stormwater Project Winner. The pond, and surrounding park, won the award based on their holistic philosophy, intergovernmental cooperation and innovative approach to the removal of invasive snails. 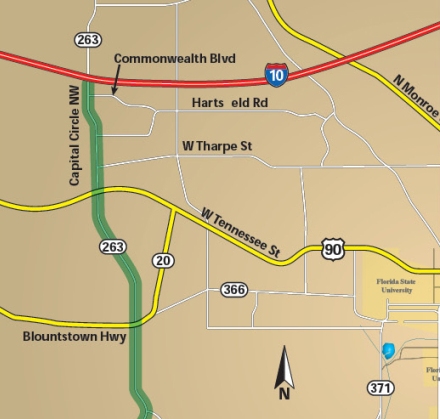